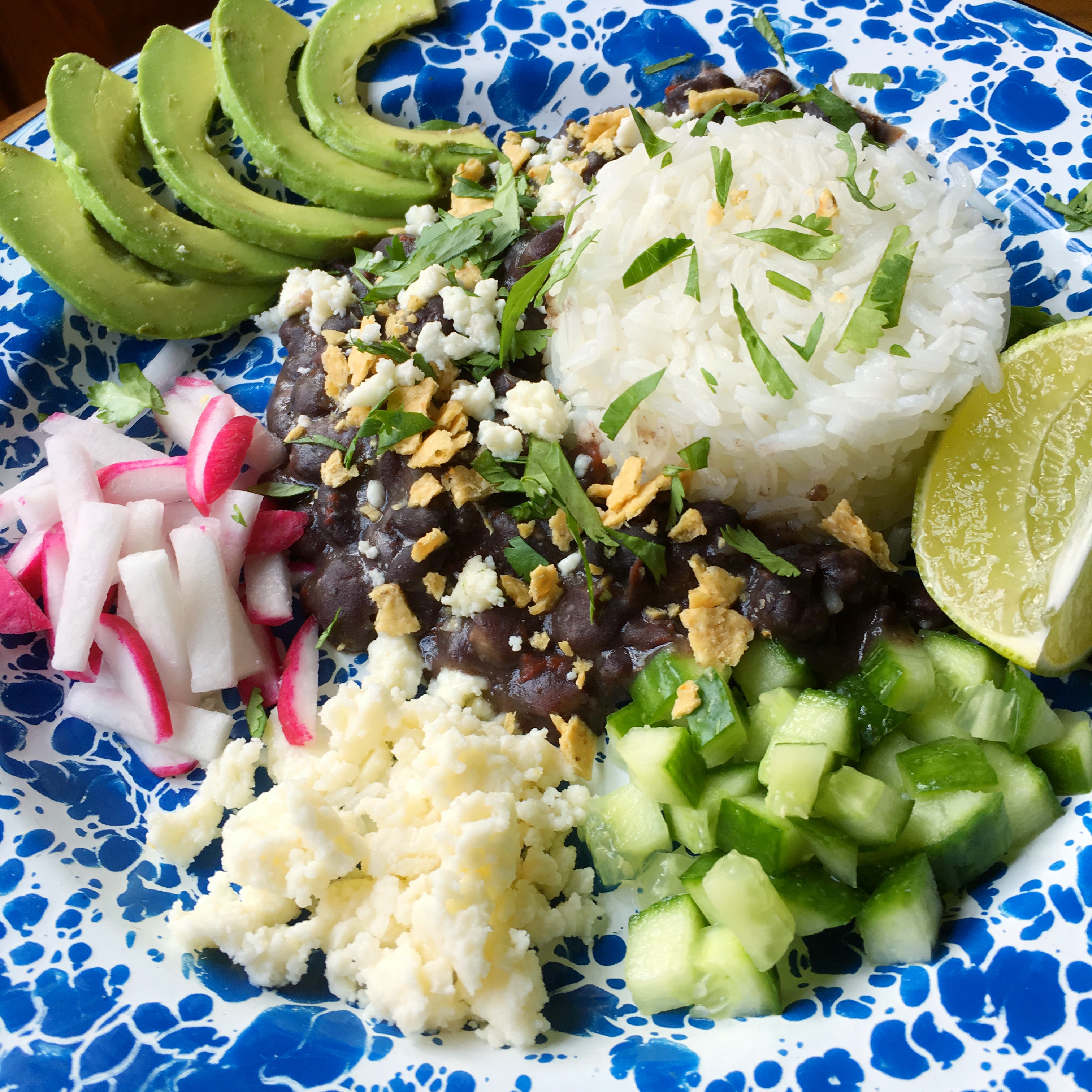 If you’re not Cuban can you rightly even say what Cuban Black Beans are? All I know is that this is a mash up of several influences, all of which were titled Cuban Black Beans. These are a staple in our house because they are cheap and easy to have on hand. Make a big batch and freeze dinner size portions so you can always throw down dinner at the last minute with whatever accompaniments you have on hand.

We usually eat them straight up with rice, avocados, salsa, sour cream, queso fresca (or any cheese) radishes and cucumbers. I also like too crunch up tortilla chips and put them on top. They make great burritos, quesadillas and huevos rancheros too.

I cannot emphasis this strongly enough – BRINE YOUR BEANS! It makes a huge difference and gives the beans a creamy texture that I have never been able to achieve any other way.

Over the years, I have made this recipe simpler and simpler and now often make them without any spices at all, just the aromatics and they come out great. So, the spices and added seasonings are optional. When the beans are done cooking, give it a taste and decide what you want to add. The marmite and soy sauce (a J. Kenji Lopez Alt trick) gives the beans more depth IF they are lacking a certain umami. But again, taste them first and decide it they are needed. If you want to make the beans vegetarian, omit the bacon and then the marmite and soy sauce trick is more essential to add that depth of flavor. The balsamic vinegar is good if you need to balance out the salt.

This recipe uses a pressure cooker but you can also just cook the beans on the stovetop at a gentle simmer until done, about an hour and a half. You may need to add more water as they cook if they get too thick or start to stick on the bottom.

1 onion, cut in half

2 heads of garlic, keep intact but remove papery outer layer and cut in half horizontally

1 orange cut in half

queso fresco or other shredded cheese

Brine the beans overnight in 6 quarts of water and 4 tablespoons of kosher salt. If you forget to do this the night before you can put the beans, water and salt in a big pot, bring to a boil, then turn off the stove and leave the beans covered for 1 hour.

Drain and rinse the beans.

When the beans are done, taste and if desired, add the oregano, cumin and coriander and simmer gently for another 30 minutes. Taste again and add marmite, soy sauce and balsamic vinegar if desired. (SEE NOTES ABOVE ON ADDING SEASONINGS)