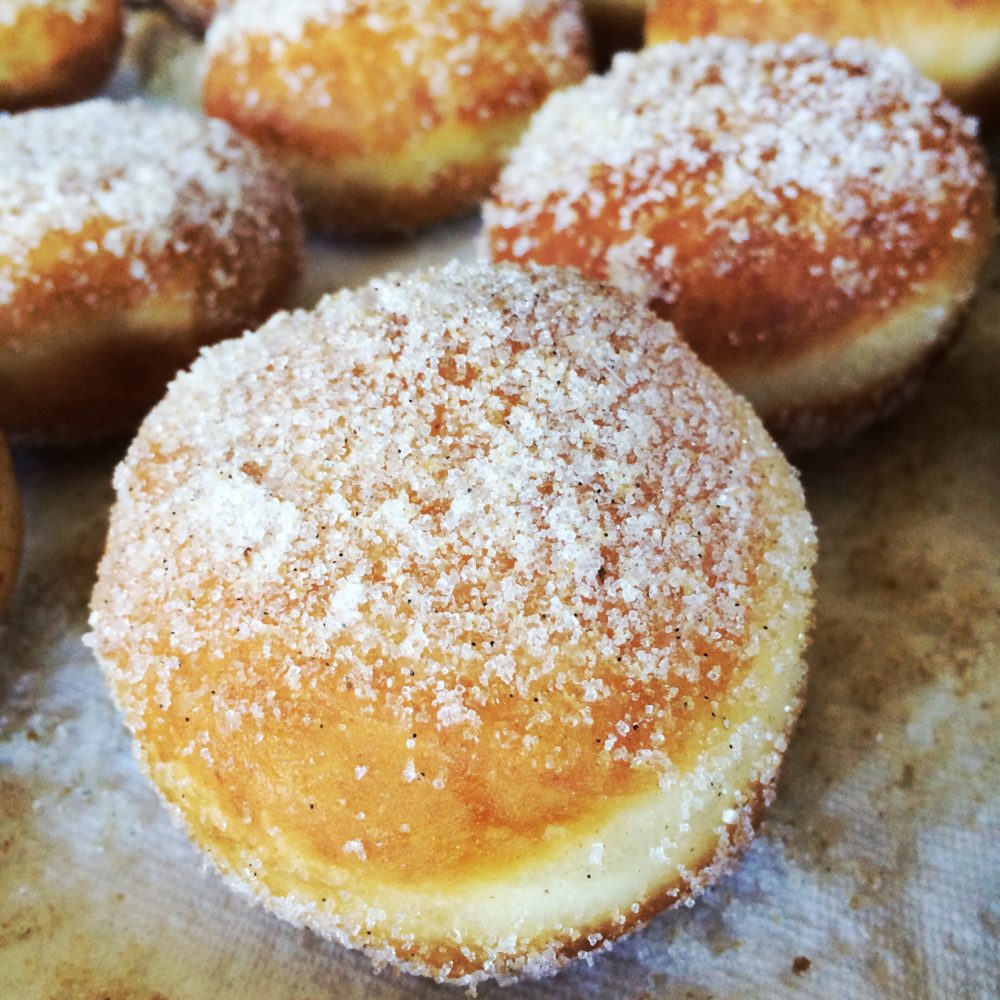 I was so ecstatic the day I made these doughnuts that my 9-year old daughter said she’d never seen me this happy in her life. The look of wonder on her face as she watched me pound the countertops and repeat “Oh…my….god” reminded me of the first time I saw my parents drunk. Her face betrayed a confused smile that bounced between enjoying the spectacle of my exuberance and concern that something might be seriously wrong with me. I blame nostalgia.

As a child, Sunday mornings were a battleground between my mother and father’s priorities. More specifically it was a moral choice between church and doughnuts. We were never particularly religious growing up, but my mother did feel a need for some institutional moral guidance and chose our local Lutheran church. My father, on the other hand, had little use for moral guidance, much less morals themselves. Instead, he was deeply committed to the idea that Sunday mornings were made for eating doughnuts while he smoked his menthol Kool’s and read the Sunday paper. Nursing his Saturday night hangover may also have motivated his devotion to such practices. I’m not entirely sure why my mother continued to engage in this battle since, even if she won, my father would fall asleep in church, sometimes snoring loudly, prompting looks of disapproval from the faithful directed not just at my dad but our whole family. Nonetheless, she persisted.

The argument itself would happen out of earshot but the smell of victory made itself known first thing when I woke up. The scent of Charlie perfume wafting from my mother’s room meant I had to get dressed for church. But, if I smelled cigarette smoke, I would run downstairs to the sight of my dad on the couch in his undershirt reading the paper, a box of Dunkin Donuts on the coffee table in front of him. I would grab the comics section and a lemon filled and lie on the floor next to the stereo listening to Kasey Kasem count ‘em down for the rest of the morning.

Like so many tarnished 70’s memories, I’d long ago discarded eating doughnuts in the dust bin of things I once loved but would never do again. It’s not like I haven’t tried. I was thoroughly disappointed by the Krispy Kreme craze and left cold by Dunkin Donuts when it finally arrived on the west coast. I chalked it up to my caveman childhood palette and filed doughnuts away with the Chef Boyardee Ravioli’s and the Swanson’s Salisbury Steaks. 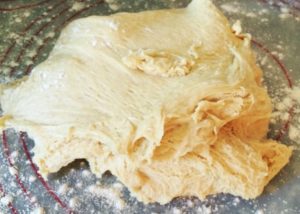 And then came Barcelona. Yearning to travel after years of raising small children, I took a tiny window of opportunity when my husband could pick up the slack and went to Barcelona for a week to eat, walk and sleep uninterrupted. Early on my first morning, I stumbled into La Boqueria Market with it’s stalls of gorgeous fruits and vegetables, local fish, meat and poultry, and spices. Markets like these pain me slightly. The exotic flavors and unknown ingredients inflame my desire to cook but this was before the days of airbnb and without a kitchen I am left wanting. Just as my mind was about to veer down this unfulfilled rabbit hole, I smelled something sweet and fried and followed the scent to a countertop restaurant on the other side of the market. Standing behind the packed counter, was an old Spaniard straight out of central casting. Small and dramatically mustached, he tossed off jokes to the patrons in between non-stop requests for photos from tourists. I later discovered the restaurant, Bar Pinotxo, was totally famous, hence the mob of people. 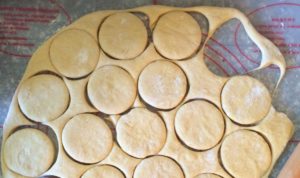 I finally snagged a stool at the end of the bar and ordered what seemed to be their most popular pastry. It was called a bomboloni but make no mistake, it was a straight up doughnut of the highest order. After the first bite, I was overcome. It was like eating a cloud filled with an intensely delicate and perfectly sweetened cream patisserie. I restrained myself from moaning out loud but I did not restrain myself from ordering two more. I’m pretty sure my eyes rolled back in my head. This was beyond the childhood doughnut of my dreams by a magnitude of a thousand. My swooning caught the old man’s attention and he laughed at me as he delivered the third one. Every morning after that I went to Bar Pinotxo for a bomboloni and coffee and then dreamed about that doughnut for the rest of the day. I was certain I would never taste anything like it again.

When I got back, I saw that Joy the Baker (love her!) had made doughnuts from a Gourmet recipe and it made the dream seem possible. But the recipe languished in my to-cook file untouched. What are the chances I could even begin to rival that cream filled cloud? Years later, the kids and I saw a doughnut episode on The Great British Baking Show and it was game on. We had already tackled a couple of baking challenges inspired by the humble pack of cheeky amateurs and the kids got really excited about the doughnuts. So the next Sunday morning I woke up early and said fuck it, we’re making doughnuts. 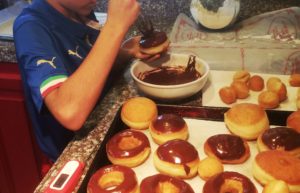 I wanted my old favorite, the lemon filled, but my son wanted a chocolate glazed. So, we doubled the dough recipe and got on with it. While the dough was rising, I started thinking maybe a passion fruit curd instead of lemon, and then maybe cardamom sugar instead of powdered. They both came out a dream. Best of all, I didn’t have to endure my parents marital discord and the sight of my dad in his underwear to get one. 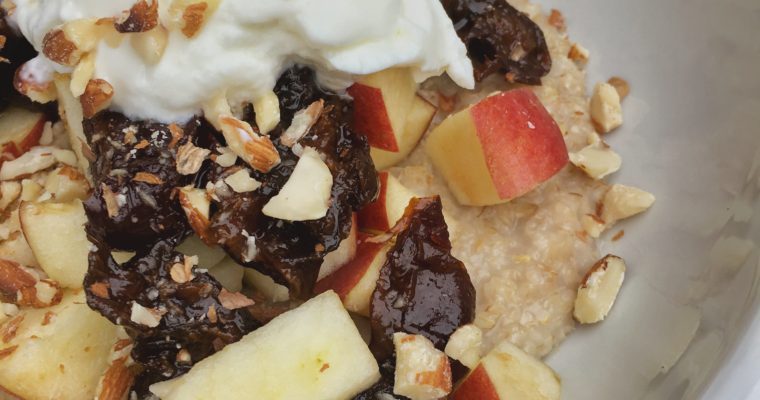 Let me remind us all that prunes are dried plums. Extolling their virtues as a remedy to afflictions not to be named here (this is a food blog after all) has ruined the culinary reputation of these fine dried fruits. Thankfully, Sally Schneider has Please […] 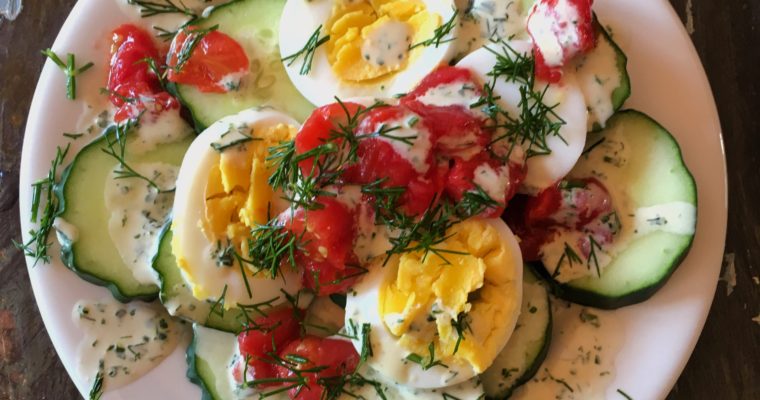 When my husband was in film school, a classmate from Israel had a wife, Hadas, who was an amazing cook. She later became a pastry chef but in those days, I mostly remember loving her salads and the unique twist of herbs and dressings Please […]