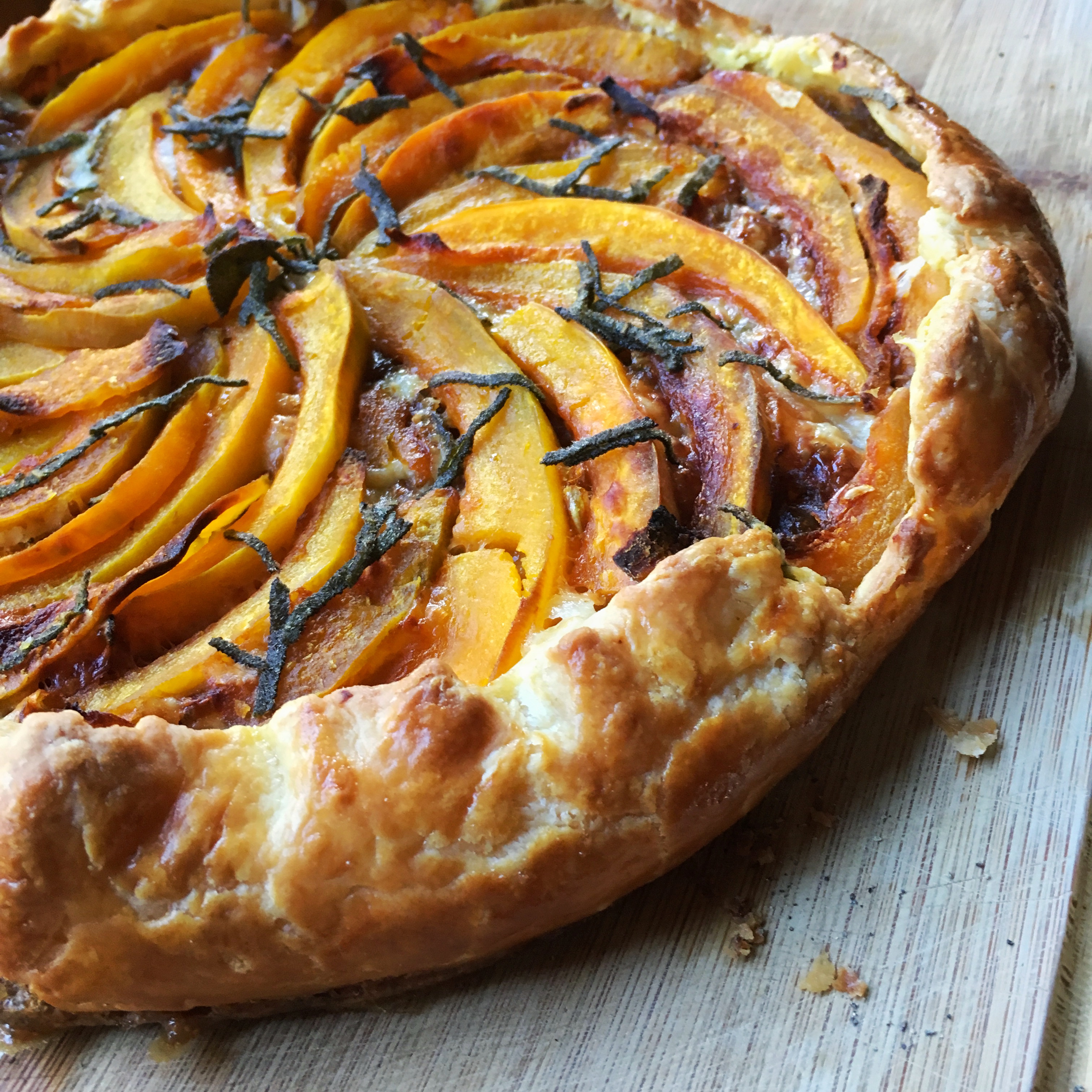 I am a freak for galettes, savory or sweet. I love the rustic look, the ease of making them and the ratio of dough to filling is parfait. Last week I had some zucchini waiting to find its purpose in life so I busted out a galette improvisation and I luurved it. I luuurved it so much I wanted to keep going with vegetable/cheese combinations so I sniffed around the blogosphere and of course Smitten Kitchen had it all sussed out.

In addition to a zucchini galette, she made some fine looking butternut squash and mushroom versions. Her galette crust proved impeccable. I used her ingredients but adapted the method for working the butter into the dough. As many ways as I’ve tried making crusts, working the butter in with my fingers always seems to yield the best result. Using her fillings as a template, I adapted them based on my own preferences and voila, my savory galette game has been officially upped. Thanks SK.

Makes one 10 inch round

Remove bowl from the freezer. Toss the flour over the butter pieces so they are all flour covered. Pinch each butter piece between your thumb and forefinger to form flat discs. This takes a little bit of elbow grease but is worth it as the crust comes out perfect every time. Once all the pieces are pinched flat, keep grabbing bits of flour and butter pieces and squeeze together until much (not all) of the flour is incorporated into small butter bits. (If this is more work than you’re up for, you can put the butter flour mixture in the food processor and pulse until it resembles coarse meal.) 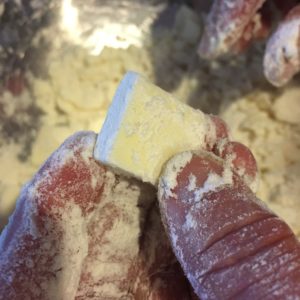 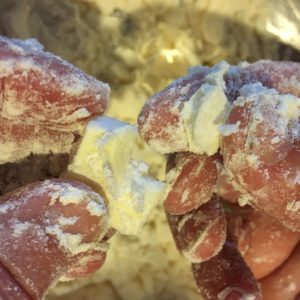 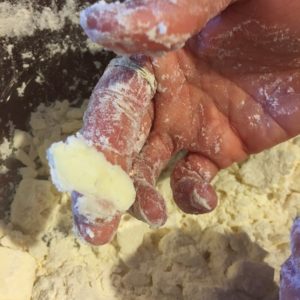 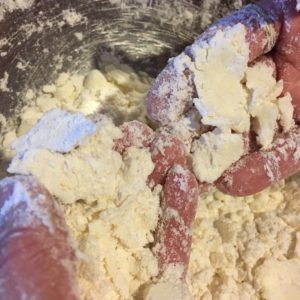 In a separate bowl, mix together the sour cream, lemon juice and ice water. Pour into the flour mixture and stir until you have a shaggy looking dough that will hold when you press it together. 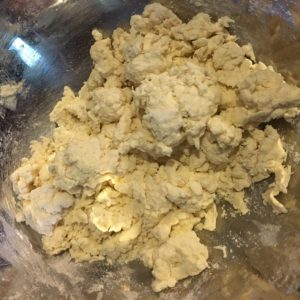 When you’re ready to fill, take the dough out of the fridge and preheat the oven to 400.

Roll dough into a 12-inch round. Fill according to the instruction below for the galette of your choice leaving a 1 ½-inch border empty. Once the filling is spread on, bring the edges of the dough over the filling pinching each fold together. Mix the egg with 2 teaspoons of water and brush the edges of the pastry with the egg mixture.

Bake for 30-40 minutes until the pastry is golden and crispy. It can take longer depending on your oven so be patient and keep watching for that lovely golden brown crust.

1 small kabocha squash (about a pound)

Preheat the oven to 375. Cut the kabocha in half and scrape out the seeds. Peel the kabocha. This can be a little bit of a bitch but I find it works best by putting the cut side down on a cutting board and scraping away at the skin with vegetable peeler while you hold the squash down with the heel of your other hand. Cut each half into quarters (8 wedges total.) Toss wedges with some olive oil and a teaspoon of salt. Roast in the oven for 30 minutes or so until tender. Remove from the oven and allow to cool enough that you can handle them. Slice each wedge into three thinner slices. You want them to be about 1/4 inch thick.

While the kabocha is roasting, carmelize the onions. Heat a large dutch oven over high heat for 2 minutes. Put 3 tablespoons of olive oil in the pan and then add the onions, thyme, salt and pepper. Cook on high for 5 minutes stirring often then turn down to medium. Add the butter and cook for 15 minutes until they start to caramelize. Turn heat to low and cook another 10 minutes until the onions are a deep gold/brown.

Spread the caramelized onions over the galette dough leaving a 1 1/2-inch border. Sprinkle the gruyere over the onions. Lay the kabocha slices in a neat spiral over the onions. Toss the slivered sage leaves with a little olive oil and kosher salt and sprinkle on top of the kabocha.

Fold the edges of the dough up over the filling, pinching each of the folds together as you go. Brush dough with egg mixture and bake at 400 for 30-40 minutes until the crust is a nice golden brown. It can take longer depending on your oven so be patient and keep watching for that lovely golden brown crust. 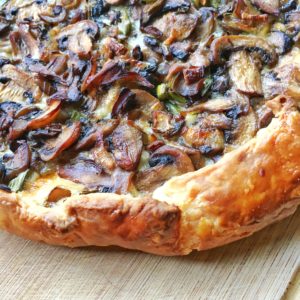 1 lb. mushrooms, sliced. Any combination will work. I used shiitake, oyster and button.

2 garlic cloves minced (I use a microplane)

1/2 cup sharp cheddar, grated (or any other cheese you like that works well with mushrooms)

Clean the mushrooms. Traditional kitchen wisdom tells you never to wash mushrooms but I’ve always thought that was bollocks and then Kenji Lopez-Alt confirmed it for me. The problem with washing is you don’t want to add moisture which  you are usually trying to remove from mushroom when you cook them. The simple answer is to rinse them thoroughly and then pop them in your salad spinner and wick away all the water. Thanks Kenji!!

Heat a large skillet over medium high heat. Swirl in a tablespoon of olive oil and add half the mushrooms. Saute until they lose all their moisture and turn a nice golden brown, about 8 minutes. Remove from the pan and repeat with the second half of mushrooms. Return the first batch to the skillet and add the garlic and spring onion tossing until the onion is wilted and the garlic fragrant, about 3 minutes. Remove from the heat and add the soy sauce, butter and lemon. Add more of any one of these if you like. The balance is up to you.

In a small bowl, combine the ricotta and parmesan.

Fold the edges of the dough up over the mushrooms, pinching each of the folds together as you go. Brush dough with egg mixture and bake at 400 for 30-40 minutes until the crust is a nice golden brown. It can take longer depending on your oven so be patient and keep watching for that lovely golden brown crust. 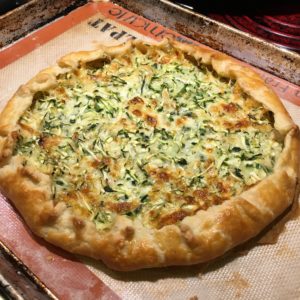 In a small bowl combine the garlic and olive oil. Set aside

Place the grated zucchini in a colander and set over a bowl. Toss the zucchini with the kosher salt and let sit for 10 minutes.

In a small bowl, combine the ricotta and parmesan. Stir in 1 tablespoon of the olive oil that’s been soaking with the garlic. Season with salt and pepper.

Roll out the pastry as instructed above. Spread the ricotta mixture in an even layer over the pastry leaving a 1 1/2-inch border. Top the ricotta with the zucchini/mozzarella mixture. Drizzle the other tablespoon of olive oil from the garlic mixture over the zucchini. You can also drizzle some of the garlic on top if you like. I prefer the milder taste of the garlic infused oil but if you’re a garlic lover, go for it.

Fold the edges of the dough up over the zucchini, pinching each of the folds together as you go. Brush dough with egg mixture and bake at 400 for 30-40 minutes until the crust is a nice golden brown. It can take longer depending on your oven so be patient and keep watching for that lovely golden brown crust.