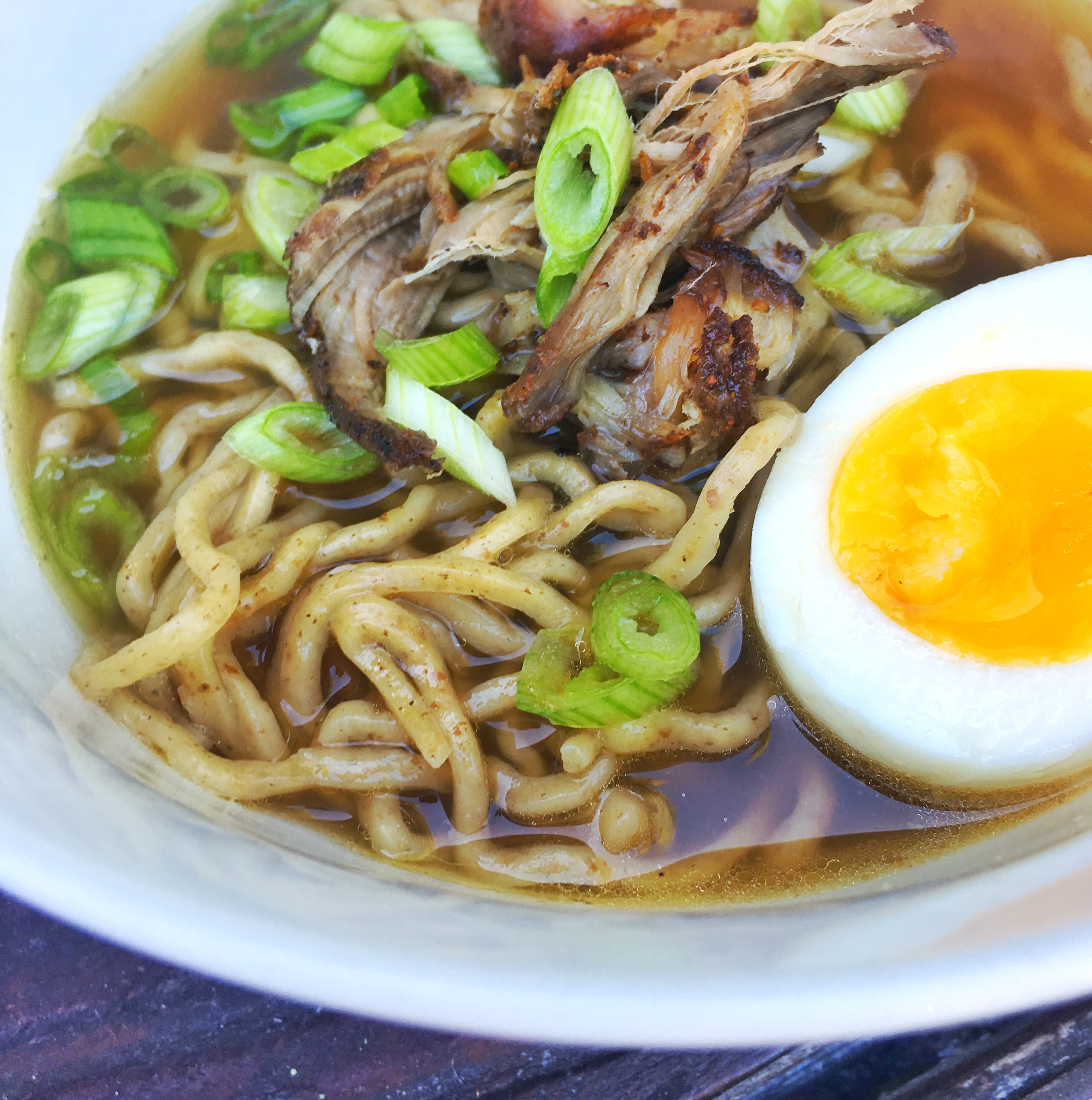 Holy cow it’s been a long time since I posted. But, I have an excuse. Since I started posting food pics and blogging, folks have been asking me to cook for them so I started a Family Dinner Club. I cook three days a week and it has been awesome, inspiring, a lot of work and a lot of fun.

I also went to Japan and became obsessed with Yuzu Shoyu Ramen. It has a lemony twist and I don’t see it much stateside. Before we left, we went to see the documentary Ramen Heads to get in the groove. I had no idea the artistry that goes into this simple, satisfying dish and the number of masters toiling away on all kinds of variations. From the base broth, to the flavoring tare, to the noodles, each is a meditation on texture and flavor that plays off the others. While complex in execution, the result feels primal and basic. In the early 20th century it took off in Japan (after arriving from China) because it could provide the increasingly urban workforce with quick affordable calories. 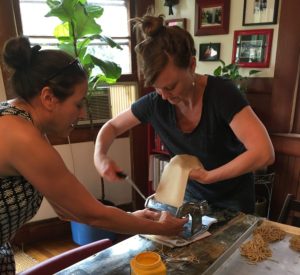 Last weekend, supercook pals Marqui and Stephanie came over and we busted out a test batch of yuzu shoyu broth and homemade rye noodles. It was pretty freaking impressive and I will definitely be adding it to my dinner party rotation. It’s a good one to make with friends as it is time consuming and does require some specialty shopping.  Special thanks to Stephanie and Marqui for the legwork on the noodles.

The broth was adapted from Atlanta Chef Mihoko Obunai. I toned down some of the fish flavor in the main broth and amped up the chicken by roasting it before simmering.

I’m not a big fan of chashu. I find it too fatty. Instead, I used pulled pork. You can make any of your favorite pulled pork recipes. Just save the cooking liquid from the pork to use in the tare. I made the porchetta from the Baco Cookbook and saved the broth. It has a number of other spices in it but that just made it richer and yummier. 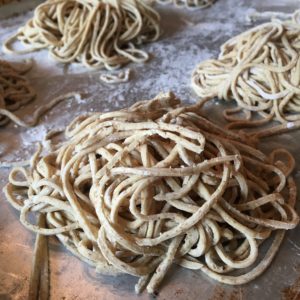 Also, I don’t have access to yuzu lemons so I added yuzu tosho and yuzu juice (both available online or in Japanese markets) but you can use regular lemon juice and lemon rind to taste at the end of cooking until the broth has enough lemony undertones.

The noodles are straight from Stephanie at iamafoodblog. She adapted them from Ivan Orkin after much hard work so check out her handiwork here. We did indeed need to add a little more water as she suggests might happen. Be careful though. Add just until the dough hangs together. It will hydrate more as it rests

Any ingredients you’re not familiar with can be found online or at Japanese markets. Some are available at Korean markets but it’s a little hit or miss in my experience.

There’s no point going to this much work and not making a ton of broth and pulled pork to use later. Freeze what you don’t use so next time it’s a little easier to bust a ramen out.  All you’ll need to do is make noodles.

To Finish the Broth

Yuzu tosho (or lemon rind if you can’t get it)

Yuzu juice (or lemon juice if you can’t get it)

Heat the oven to 450. Lightly oil a couple of roasting pans and arrange the chicken wings in a single layer making sure not to crowd them. Roast for 30 minutes until skin is golden brown and crisp. 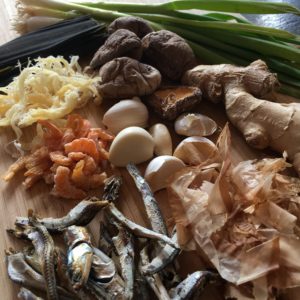 Place the chicken in a large stock pot and add 8 quarts of water. Bring to a boil, reduce heat to simmer. Simmer 1 hour. Add remaining broth ingredients and simmer 6 to 8 hours more. Strain through a chinois or mesh strainer.

For the Shoyu Tare

In the final hour of the broth simmering, make the shoyu tare. In a saucepot, combine the cooking liquid reserved from pulled pork with remaining ingredients. Bring to a boil and reduce to 2 cups. Strain through a chinois or mesh strainer and set aside.

When the broth is done, add the shoyu tare to the broth and season with soy sauce, lemon juice and yuzu tosho to taste. I added 1 tablespoon of each and then kept adding each based on my personal taste.

To Assemble and Serve 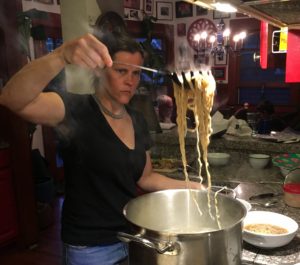 In a pot of boiling water, working in small batches, cook noodles for 1 minute. Ladle hot Broth into bowls, add cooked noodles and top with Pulled pork, half an egg, green onions, and a sheet of nori. Finish with a drizzle of caramelized garlic oil.

There’s little I despise more than wrestling with a massive piece of meat to brown it before slow cooking. I adapted this recipe to use the instant pot instead of baco’s 10-hour slow roast but in order to get a crispy outer layer I opted to tuck the pork back into the oven after pressure cooking until it was just right.

Toast the cumin, coriander and cardamom in a dry skillet over medium heat until fragrant. About 2-3 minutes. Remove from the heat and grind in a mortar and pestle or spice mill. Transfer to a bowl and mix in the rest of the spices.

Season the pork all over with the baharat, salt and several grindings of pepper. Cover with plastic wrap and let rest overnight in the refrigerator.

Place the pork with ¾ cups water in an instant pot or other pressure cooker. Select high pressure and cook for 75 minutes. Use natural release method. Test the pork to make sure it is fork tender and pulls apart easily all the way through. If not, cook for another 10-15 minutes.

Place the pork on a roasting pan with the fat cap side up. This will keep the meat moist while you crisp up the outside. Place in a 350-degree oven for 30-45 minutes or until the outside is nice and crispy.

For the Aji Tamago (Soft Egg)

Cook one egg for every 2 people you’re serving. Pierce fat end of each egg with a thumbtack to make a tiny hole. In a saucepan, bring water to a boil and with a mesh spider or strainer, carefully lower eggs into water. Cook 7 minutes. Drain and immediately run under cold water. Peel. Place eggs in I cup of cooking liquid reserved from pulled pork overnight or just until ready to use. I used them the same day and they were fine.

For the Caramelized Garlic Oil (adapted from Ivan Orkin)

This is so good you can use it on anything. Meat, poultry, fish, eggs, salads. It will become part of your regular rotation once you start using it. Ivan Orkin cooks the garlic until it is burnt black and sounds hollow. Given my eternal cooks fear of burning garlic, I experimented with doing it both burnt black and caramelized nut brown and I preferred the caramelized but they are both delicious and others preferred the burnt black. I also upped the spice and added some salt.

½ teaspoon salt or more to taste

Put garlic cloves and canola oil in saucepan and cook over medium high heat until the garlic cloves are dark nut brown. Remove from heat and let cool.